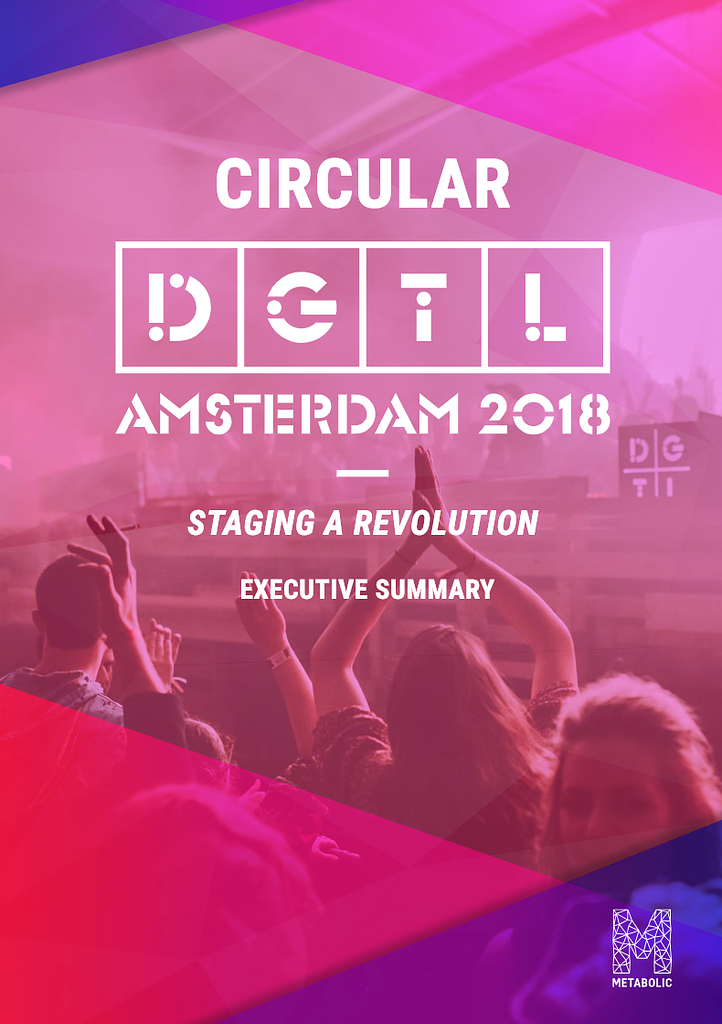 Towards a circular DGTL festival

World-renowned electronic music festival, DGTL welcomes nearly 40,000 visitors to the NDSM-Docklands in Amsterdam North every year. Festivals of this scale demand immense resources and have the potential to produce tons of damaging waste; but DGTL Amsterdam is showing the festivals industry that this does not have to be the case.

Confronting the unsustainable principles of the current festival model, DGTL is striving to become the world’s first circular festival by 2020. As part of its constant search for the newest technological innovations, the DGTL Revolution movement works to reduce waste, lower carbon emissions, and increase sustainability awareness amongst its visitors. And its efforts are not going unnoticed: in late 2017, DGTL was voted Amsterdam’s most innovative and sustainable SME (small/medium-sized enterprise).

In 2017, Metabolic was commissioned by DGTL to map out the festival’s material and waste flows, transition from waste management to resource management, and prioritize impact hotspots for future editions. Now, with six editions across three continents, we team up with DGTL again, to map not only material and waste flows, but also energy and water flows. Using this data, DGTL is able to answer some key questions about where the festival should focus in order to achieve a circular state, and continue its exemplary efforts in bringing sustainability to the forefront of the festivals industry

What is a circular festival?

The circular economy essentially requires us to design an economic system that results in the cycling of all resources at high value, similarly to what we see in nature. One way of realizing this is designing products for reuse and recycling at the end of their life cycles; this prevents products and components from being downcycled (e.g. using broken concrete as filler) or mixed with other material flows in such a way that they can only processed as mixed waste instead of pure resource steams. On the one hand, making DGTL a circular festival comes down to minimizing waste as much as possible. On the other hand, it crucial to separate and recycle the waste produced at the highest possible value. The cleaner the waste is delivered, the more chance the waste processor will cycle the resources at a higher quality.

But circularity is much more than just recycling materials, and Metabolic’s definition of a circular economy goes beyond only materials and waste: it is a ‘new economic model for addressing human needs and fairly distributing resources without undermining the functioning of the biosphere or crossing any planetary boundaries.’ What this means is that the festival should also aim to use renewable energy, be resilient, and structurally support key parameters of planetary health such as biodiversity, health and wellbeing, and culture and society. Festivals can make critical choices regarding location, accessibility, mobility options, catering, beverages, and power supply to have a positive influence not only on the local environment, but also to avoid embodied impacts in the form of C0₂ emissions, land and water use.

After getting a partial preview of DGTL’s metabolism in 2017, we were eager to map DGTL’s full metabolism in 2018. Of course, even with fenced-off boundaries, you must define your scope clearly. For DGTL 2018, we quantified the flow of materials, energy, and water on the festival terrain, the different kinds of environmental impacts these flows are associated with, and the carbon footprint of artist and visitor travel.

The method we use here is called “Material Flow Analysis” (MFA), which is always depicted as a Sankey-diagram and is read from left (inputs) to right (outputs), which helps to visualize the different resource flows and their sizes. The lines in the infographic are scaled to represent the total mass of the resource flows consumed, reused, or disposed of at DGTL. Since some flows are significantly bigger than others there are some exceptions to the scaling rule, such as the representation of water flows, which have been scaled down. Every resource flow is inherently linked to ecological impacts – both positive and negative. Red callouts on the infographic point out selected areas of high environmental impact, while the green callouts present possible opportunities associated with the different resource flows. We consider the data in the context of these impacts and briefly discuss the challenges these imply for DGTL’s activities in the embodied impact analysis.

From sustainability pioneers to circularity champions

This year, DGTL radically increased its efforts to address some of its sustainability shortfalls from the year before. A number of fundamental changes to the set-up and operation of the festival have had significant impacts on its circularity performance.

At DGTL, waste becomes the resources for new products. As such, they have moved away from waste collection areas, which are typically tucked away behind- the- scenes, to a “Resource Street”, which is central for all visitors to see. Consisting of a recycle hub and pyrolysis installation that turns bottle caps into oil for new plastic, the Resource Street allows visitors to discover the value of their own waste and change the narrative from “waste as a problem” to “resources as a solution”.

This year, DGTL launched the first ever “circular food court”, a zero-waste initiative which garnered the festival a lot of media attention. The newly designed food court is a powerful alteration to how the festival functions. Its primary goal is to eliminate waste produced for the food court: food waste and disposables. The EcoCreation composting machine enables this ambition by converting all food waste and biodegradable disposables into usable compost within 24 hours. As a result, DGTL produced virtually zero food court waste this year.

DGTL stepped up its volunteer process this year. Volunteers were expertly scheduled, managed, and distributed, with clear tasks and dedicated teams. They picked up terrain litter, ensuring it was recycled where possible, and separated all consumer waste, resulting in recyclable monostreams and actionable insights for future editions.

In 2017, we saw that the most waste from festival goers originated from food and drink packaging. Hard cups were introduced to DGTL a couple of years ago to combat the growing plastic waste problem on festival grounds. The system asks festival goers to pay a deposit for their cup, which incentivises them to return it instead of throwing a single-use cup on the ground after use. As the system was better communicated this year than in previous years, it offered greater success rates in decreasing plastic waste. With the hard-cup and biodegradable disposable successes, DGTL visitors cut their waste in half from last year. So much so that in 2018, the average Dutch festival goer produced seven times more waste than a DGTL visitor (See Figure 3).

One of the biggest success stories of DGTL 2018 was one the average visitor wouldn’t see: design for disassembly. Last year, DGTL produced just under 10 tonnes of demolition waste, mainly from stages and decorations that were built in a “linear way” (take, make and waste the material). This year, due to mandatory reuse regulations, design for disassembly, and strict enforcement, DGTL decreased its demolition waste by 86%. The significant reduction is not only impressive, but also shows the autonomous nature of festivals and how a focused, dedicated team can make true impact happen in just one year.

To gain an understanding of how some of the material, energy, and water flows through DGTL rank on different kinds of impacts, we evaluated the major flow categories on three important indicators: embodied land use (ha), water use (m3), and CO₂ emissions (in kg of CO₂-equivalents). By embodied impacts, we refer to the land use, water use, and carbon dioxide emitted during all life cycles of the material, such the manufacture, transport, construction, and disposal. From this analysis, we can also get a glimpse of the magnitude of DGTL’s indirect impacts – effects occurring along the supply chains of all the products that DGTL consumes. These points of evaluation serve as a filter to highlight which areas of DGTL’s resource footprint are likely to be contributing most to bringing us towards environmental tipping points. Aluminium, steel, and electronic equipment were identified as the most problematic in terms of land use, water use, and C0₂ emissions. Although high in impact, most of these resource use hotspots can be drastically diminished by effective reduction, reuse and recycling policies.

Though DGTL is clearly one of the world’s most sustainable and technologically advanced festivals, there is still a road ahead for it to become fully circular. DGTL is a frontrunner in modular and flexible design, opting for reusable and recyclable materials wherever possible. However, the issue of toxicity also needs to come to the forefront. Building with wooden pallets, for example, could expose people to methyl bromide, a highly toxic pesticide known to cause acute lung injuries and chronic neurological effects. DGTL’s pioneering design for disassembly has already significantly reduced demolition waste, but the 1.3 tonnes that remained could be eliminated next year with even stricter enforcement. The amount of residual waste (7.5 tonnes) remained stagnant from 2017 to 2018, showing little innovation in its reduction. To inform this reduction, further analysis of both the festival’s procurement and consumer waste behaviour should be executed at future editions.

DGTL is indeed revolutionizing the festival industry by developing a business model that is inherently circular and leading the way for other festivals to follow suit. Based on continued commitment and rigorous execution, DGTL’s path to 100% circularity in 2020 remains attainable. Which leads us to the next question: can DGTL establish itself not only as the world’s first circular festival, but also as its first regenerative festival?