This week policymakers and industry stakeholders are gathering in the city of Brussels for the third annual edition of the EU’s Raw Materials Week. Metabolic sustainability consultant Carlo Giallombardo takes a look at some of Europe’s most critical materials in terms of economic importance and supply risk.

An initiative of the European Commission, this event serves as an opportunity to focus in on the raw materials that fuel the EU economy – and to reflect on where these materials come from, how they are used, and what happens to them after the products in which they are contained reach their end-of-life.

This is particularly relevant because of all existing raw materials, some are increasingly coming under scrutiny: these are the materials that are most at risk of depletion, challenging to substitute, and unevenly distributed across the globe. The European Commission has identified 27 Critical Raw Materials (CRMs), tracked and categorized based on two parameters: Economic Importance and Supply Risk.

In the view of the European Commission, the EU is overly reliant on imports, and more research and innovation is required to support and ensure raw material supply in the future. Most importantly, more attention needs to be drawn “to the importance of CRMs for the transition to a low-carbon, resource efficient and more circular economy.”  With increasing global demand and serious concerns about the future availability of CRMs, Metabolic has delved into the European Commission’s data to highlight the current state of play in regard to the EU’s raw material supply chain. 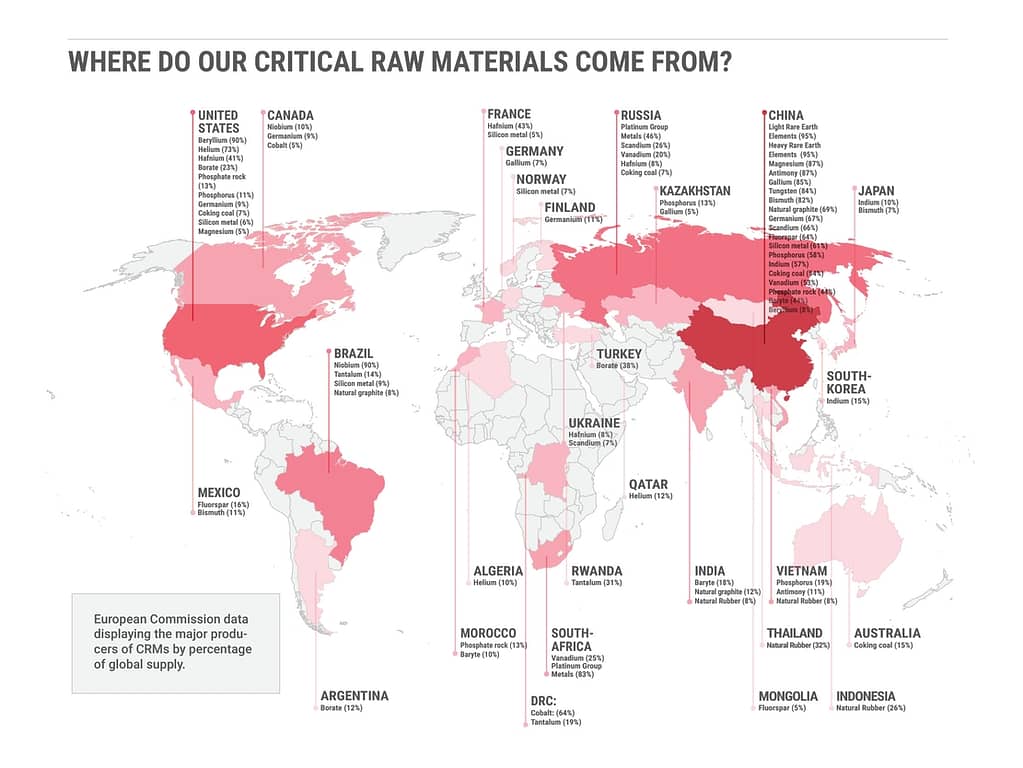 This heatmap, based on European Commission data, highlights the major producers of CRMs globally. China is the unchallenged CRM champion, followed by Russia and the United States of America. EU countries contribute a relatively minor amount to CRM supply. In addition to extraction, China is also investing heavily in refining. 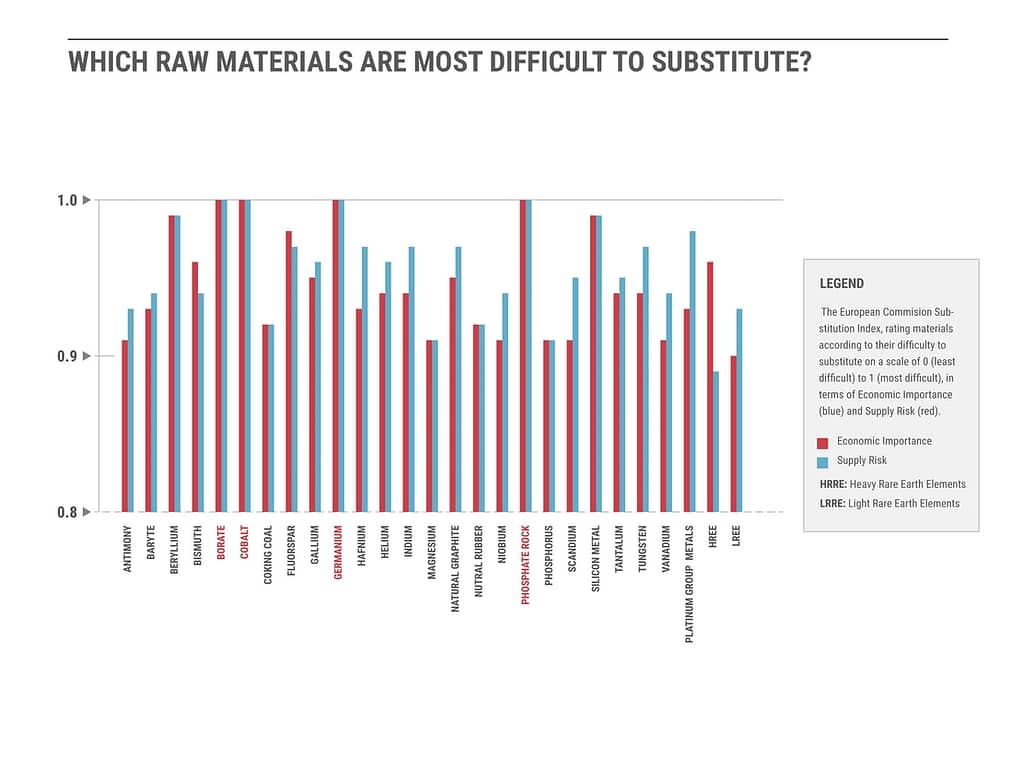 In this second graph we have used the same data table to highlight the values of the Substitution Index, which the European Commission defines as: “a measure of the difficulty in substituting the material, scored and weighted across all applications, calculated separately for both Economic Importance and Supply Risk parameters.” This index does not represent a ranking of raw materials in terms of criticality, but rather states the criticality of the material for the EU. Economic Importance encompasses end-use applications and the value added of corresponding EU manufacturing sectors, while supply risk reflects the “risk of a disruption in the EU supply of the material.” Given “1” represents the most difficult material to substitute and “0” the minimum, all these materials score extremely high in both Economic Importance and Supply Risk, with heavy rare earth metals still scoring 0.89 for Supply Risk despite rating the lowest of the 27 materials.

Four materials highlighted in red scored the maximum rating, including cobalt, used for a range of purposes including in rechargeable batteries, alloys, and even vitamins. Ranking 33rd in abundance and being widely scattered throughout the Earth’s crust, this not-particularly rare metal finds a place on the European Commission’s list mainly due to the fact that it is “only found in potentially exploitable quantities in few countries, largely centred on Central Africa.” According to the 2017 US Geological Survey, approximately 50% of the world’s reserves of Cobalt are found in the Democratic Republic of the Congo, where it is extracted in ways that present significant labor rights concerns and in conflict zones.

The third graph shows the values for the ‘End-of-life recycling input rate’, which “measures the ratio of recycling from old scrap to EU demand of a given raw material, the latter equal to primary and secondary material supply inputs to the EU.” The values here are decidedly underwhelming: Vanadium and Tungsten are at the highest range of the distribution, yet less than half of these materials are recycled, at 44% and 42% respectively, whereas eight CRMs are not recycled at all. One problem is that these materials are often applied in very small quantities that make it difficult if not impossible to extract, such as a tiny component in a mobile phone.

CRMs are used in a range of high-tech products and emerging technologies, with the European Commission noting they are: “irreplaceable in solar panels, wind turbines, electric vehicles, and energy efficient lighting.” This has potential ramifications for EU countries transitioning to low-carbon energy under the Paris Climate Agreement, such as the Netherlands. Our recent study in partnership with Copper8 found that global production of six rare metals used in solar panels and wind turbines is low enough that if the rest of the world matched Dutch targets, there would be insufficient supply to enable the shift to renewable energy needed to avert catastrophic climate change.

That’s just one of the reasons for policymakers, stakeholders and the general public to embrace Raw Materials Week as an opportunity to consider the finite resources we need to import for our consumption, from the phones in our pockets to the food that we eat, and to double down in efforts to transition to a circular economy that cycles these materials infinitely at high value.