Humans have felled rainforests, emitted carbon and depleted freshwater reserves at record speed in 2018 – our current annual environmental impact would require a staggering 1.7 planet Earths to sustain us.

According to the Global Footprint Network, August 1 marks the earliest ever Earth Overshoot Day, which represents the date on which humans have used more from nature than our planet can renew in the entire year. The day serves as a wake-up call for individuals to take action to reduce their own footprints, but the majority of environmental impact is baked into the global economic system through the decisions of large-scale governmental and corporate bodies.

As continuing on this path represents an existential threat both to global ecosystems and to human civilization, WWF-NL and IUCN NL are working with Metabolic to create tools and methodologies for governments and companies to measure their specific impact and set targets within the context of safe planetary limits. Think a carbon budget, but for every single area of environmental impact, from ocean acidification to ozone depletion to deforestation. All the vast amounts of data already gathered on these issues by disparate organizations are being integrated into one system assessing each area and the ways in which they intersect.

WWF One Planet Thinking project leader Jorien van Hoogen said: “Establishing an important baseline to operate within the ecological boundaries of our planet is just the first step. Now we are developing a scalable approach for businesses.”

Metabolic founder Eva Gladek added: “There is an urgent need for organizations and governments to be able to measure their impact relative to larger scale planetary boundaries and systemic tipping points.” 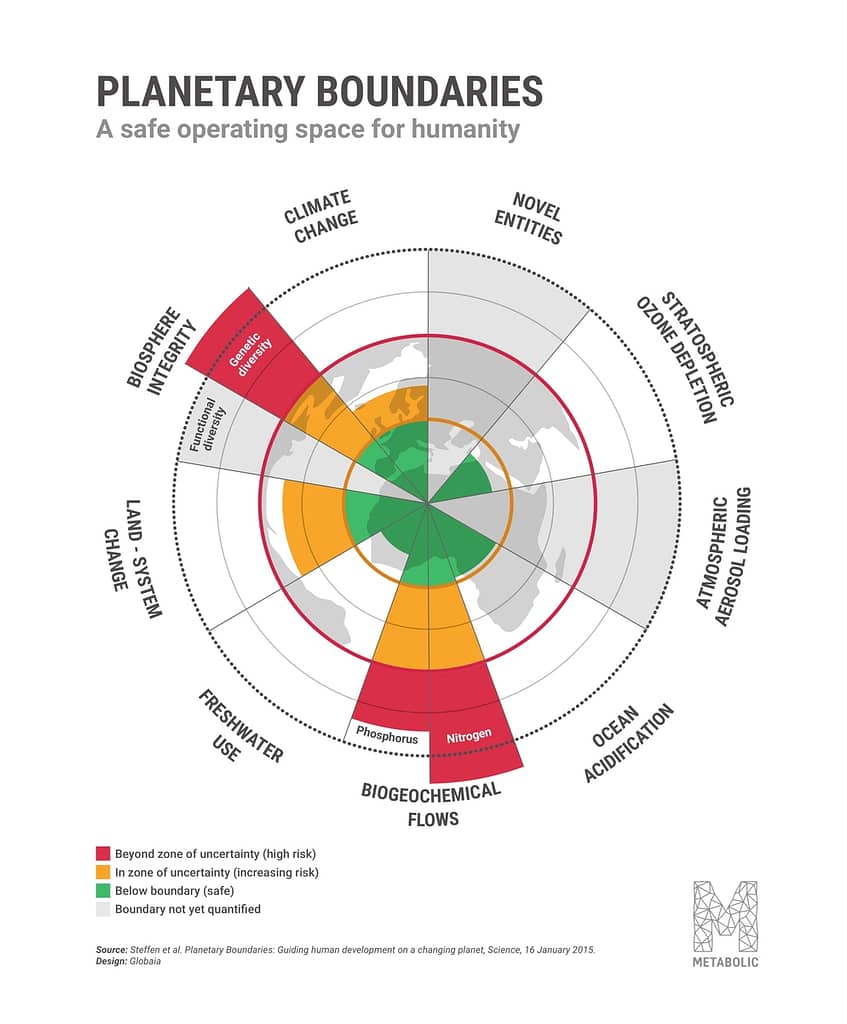 A One Planet Thinking pilot project is currently underway with Belgian plant-based food and drink producer Alpro, which has opted to be a sustainability pioneer by participating in a program that measures the company’s biodiversity footprint and context-based water targets.

The biodiversity footprint is based on the GLOBIO database, which measures the local impact of pressure factors in terms of the presence of species and the number of individuals per species. The context-based water targets measure an organization’s consumption against sustainable levels for water resources within a particular basin. The approach would for example allow Alpro to understand how much water can be safely used to nourish almond fields in Spain, and point the company to more sustainable supply chain alternatives if they are available.

Governments are also considering the need for specific environmental impact budgets. The Swiss Government’s Federal Office for the Environment (FOEN) co-commissioned the 2017 One Planet Approaches report, in which Metabolic mapped and reviewed over 60 different approaches to steer reductions of human impact to within planetary capacity. The Netherlands Environmental Assessment Agency (PBL) meanwhile has declared that the country’s impact exceeds safe environmental limits, and that the establishment of an effective national policy target requires the spelling out of clear global limits and fairly distributed national responsibilities.

According to the Global Footprint Network’s National Footprint Accounts, based on 2015 UN figures Earth Overshoot Day would occur on April 14 if the typical global citizen impacted the planet as severely as the average Dutch person. Dozens of countries in Europe, North America, Oceania and the Middle East feature even earlier Overshoot Days. The worst offender is Qatar – if the whole world had as great an impact as the oil-rich Middle Eastern kingdom, Earth Overshoot Day would occur on February 9.

To make Earth Overshoot Day a thing of the past and avert global catastrophe, governments and corporations urgently need a budgetary framework to measure their take of the planet’s resources against the maximum possible within global safe limits.

One Planet Thinking is also building a community of organisations and scientists to strengthen the knowledge base research and develop further the normative principles of the program – for more info, head here.