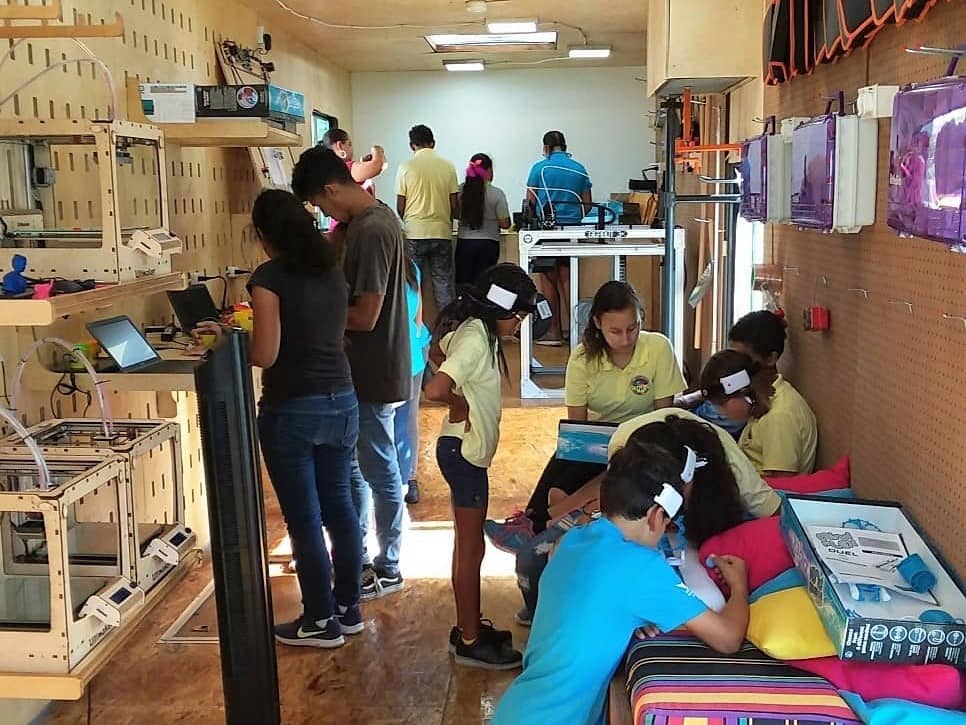 Was your primary school ever visited by a bookmobile? On the Caribbean island of Aruba, a new kind of mobile library for the 21st century is pulling into local schools – a bus filled not with books; but with 3D printers, digital drawing pads, programmable micro-controllers, and robots galore.

Of course, books are still vital to the educational development of children, but Metabolic Foundation’s community initiative, Brenchie’s Lab, recognizes that hands-on experience with the building blocks of a new kind of economy could be at least as important in the coming decades. That’s where Makerspaces come in – hubs equipped with the latest technologies and tools to design, make, and fix, transforming participants from passive consumers into the creators needed to build a regenerative circular economy. That’s why we’ve collaborated with the Government of Aruba’s Futura Lab and the National Library of Aruba to hit the road and offer students a mobile makerspace called Mo-B Lab to equip students with the skills to create what they want to see in the world.

Backed by 160,000 euros from the European Union and 40,000 euros from the Government of Aruba, Metabolic Foundation’s project coordinator Christie Mettes and research coordinator Tony Sevold and a team of local collaborators and volunteers have retrofitted an old library bus into a solar-powered wonderland of open-source technology.

“More exciting than things happening on a screen”

The result is a vehicle swarming with children using digital drawing pads and laptops connected to bioplastic-fed 3D printers, allowing the students to print whatever objects they can imagine, and create their own stickers and T-shirts with a vinyl cutter, or carve wood using a CNC router. There’s even a laser cutter that slices objects using light.

Alternatively, kids can mess around with LittleBits, a magnetically connective electronics and robotics kit that is like a high-tech version of Lego. “You can make race cars, you can make weird dancing robots with buttons and light sensors or relays, and learn how it all connects,” Mettes says.

Others might prefer to experiment with Makey Makey boards, which according to Sevold, allows kids to program any object with sufficient conductivity in the room to connect with computers. “For instance, you can connect a banana to a video game and make it represent the up arrow on the keyboard, so whenever you touch the banana, your character jumps,” he says.

Mettes adds that the technology can be connected to MIT’s Scratch programming platform, which allows children to learn coding using simple building blocks and animation. The combination has kids “designing their own games and their own controllers – it is more interactive than just sitting around on your computer.”

Another option are Arduinos, which are essentially small, programmable computers. “It is basically a blank board you can program to do anything electronics do, that the kids can reprogram using a kind of coding recipe book,” Mettes says. “It allows students to create everything from cat feeding stations to fart meters. You plug it into it into your computer, plug different sensors into the board, and program the sensors to control different things. The kids insert the code, change values and things, change how long something stays on or off, add extra lights. It’s a really fun way to learn, where things are actually happening it is more exciting than things happening on a screen.”

Students create what they want to see in the world

For the 2018-19 school year Mo-B Lab will offer after-school activities with 18 schools for a period of two weeks each, engaging up to 1400 kids aged between 8-18. Any students that want to continue playing with these technologies once Mo-B lab moves on can find it all at the fixed-location B Lab at the National Library of Aruba, which is being partially funded by the Aruban government, and managed by Metabolic Foundation’s Manuel Rojas.

According to Mettes, makerspaces aren’t just about learning how to use new technologies – by 3D printing custom objects and rapid prototypes or learning how to build a light that turns off when people leave the room, they’re about encouraging people to take control of what they consume. “It is also about the problem of a consumer society, where we just buy things and we don’t think about how things are made,” she says. “As a consumer, we have very little control over what is in the market and how it’s made and packaged, so through the maker community you are developing a new way of thinking about products – you’re building the actual products, you have control over what materials to use. You can fix things, change things, if this is no longer what you need you can remake it. It is creating a capacity to make what you want and use the material you want to use.

“In a way we’re making these decisions and creating the things that we think are needed in our society. That’s kind of why makerspaces are important. It’s fun, it’s goofy, but the core part is we change these consumer behaviors.”

Also part of the Foundation’s work on Aruba is a small-scale plastic recycling facility that experiments with 3D printing of plastic waste and works with the community to develops ways to reduce plastic waste on the island. Find out more about this here.

If you’d like to find out more about Brenchie’s Lab, please head here. For more on the work of Metabolic Foundation, go here.