How alternative currencies can enable a circular economy

Published on the 6th of December 2017 The way we engage with money is undergoing a metamorphosis. In the wake of the 2008 financial crisis, people all over the world have begun to question the stability of international monetary system. Meanwhile, advances in computing have continued on their exponential path and new technologies like the blockchain have arrived on the scene. The result? A growing wave of currency innovation that’s providing more direct and inclusive ways to exchange value. Here, Seadna Quigley and Gerard Roemers explore the emergence of alternative currencies and the role they can play in enabling a more sustainable, circular economy, as well as some useful tips on how to navigate this new economic realm.

Our financial system: a mountain of debt

We live in paradoxical times. Collectively, we are wealthier than ever before, but this wealth is concentrated in ever fewer hands. And although the economy continues to grow, it has become increasingly prone to shattering financial crises which disproportionately affect the poor and middle class.

There is growing consensus that this is a direct consequence of the way our current financial system is designed. Our euros and dollars are based on interest-bearing debt. This interest incentivizes speculation and rent-seeking (i.e. earning profits without providing any benefit to society), and has fuelled the ‘financialization’ of our economy. The result is a lack of money flowing through the productive economy, where it can facilitate genuine wealth creation by joining supply and demand. Instead, consumers bear the burden of exponentially increasing interest payments through inflation. When the financial sector grows faster than the “real” economy, this causes bubbles in financial markets, which in turn increases the risk of recessions. To give you an indication, just before the financial crisis of 2008, the total exposure (i.e. the amount of money that is at risk of loss) of the financial sector was 40 to 45 percent of America’s national income, and the total exposure of Deutsche Bank, Germany’s largest investment bank, was 50 times Germany’s national income.

The rise of alternative currencies

When we have experienced system collapse in the past, independent, local currencies have popped up repeatedly, helping to link supply and demand in a way that traditional currencies failed to do, and allowing local economies to rebound quickly from the financial crisis that ensued. However, apart from a few notable exceptions, these experiments with local currencies were inevitably outlawed by governments and central banks. Today, as such shocks become more common, alternative currencies provide an essential opportunity for local and regional economies to regain some degree of control – and consequently, greater resilience.

The evolution of the alternative currencies we see today is primarily enabled by new technologies (the internet, smartphones, electronic peer-to-peer systems etc.) that democratize and decentralize the transaction process. Organizations and communities can build alternative currency systems on their own terms, and it is now possible to design local, regional, or functional currencies that go back to the basics of what money is supposed to do: facilitate trade that generates wealth. Unlike fiat currency (government-issued money such as the euro or dollar), these currencies are not backed by debt, which leaves no room for speculation or rent-seeking.

How alternative currencies can enable a circular economy

The unique characteristics of alternative currencies could help fuel the transition to a circular economy, defined by Metabolic’s seven pillars. Firstly, complementary alternative currencies can increase the resilience of economies by supplying local and regional economies with a more reliable means of exchange during times of economic turbulence. Secondly, because they are not based on interest-bearing debt, alternative currencies don’t encourage speculation or rent-seeking. Instead, they facilitate local value creation, resulting in a more inclusive and equitable society, and more empowered local communities. And thirdly, complementary currencies stimulate sustainable business models. 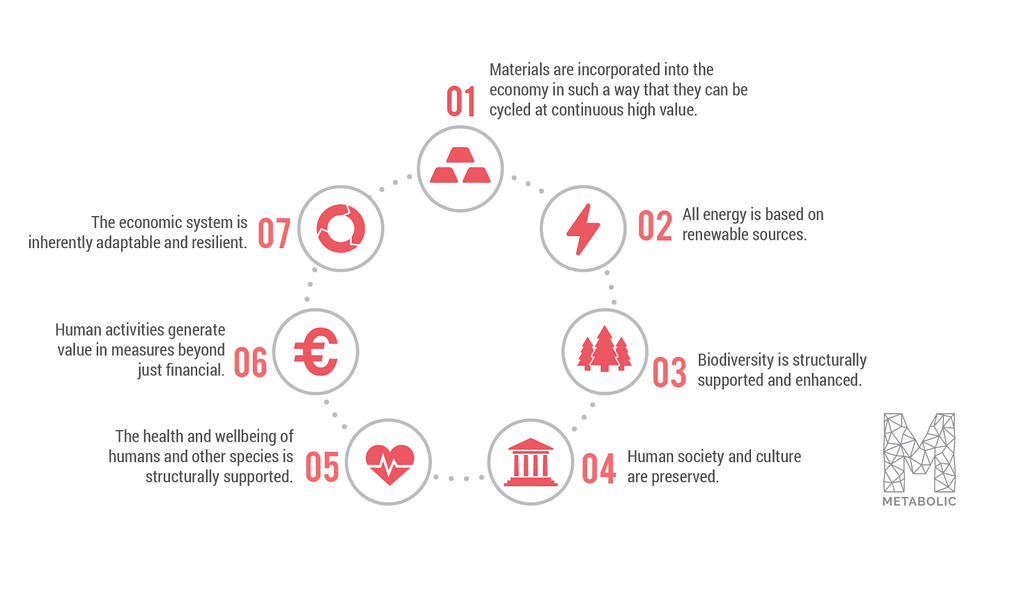 The types of alternative currencies that we are most interested in for the purposes of the circular economy come in roughly two forms: local or regional currencies and functional currencies. Local currencies are aimed at stimulating a local economy by driving community engagement, supporting independent, local businesses, and encouraging more sustainable supply chains. Successful examples of local currencies are the Bristol Pound, the Brixton Pound, the Utrechtse Euro. These currencies are often issued by local municipalities, can be bought by residents, and are intended to be spent only at local businesses, encouraging a thriving local economy. The Swiss WIR, which is based on a so-called mutual-credit system, was set up by two businessmen during the Great Depression. In such a system, money is generated in a completely decentralised way by the participants, making the system resilient to outside forces. This is also the case with TimeBanking, which issues Time Dollars to participating volunteers for every hour of work, which they can exchange for discounts on local products and services.

Functional currencies, on the other hand, are not limited by geographical scope, but rather by certain functional characteristics. This alternative form of value exchange focuses on enabling a desired behaviour, and could become one of the most powerful enablers of the transition to a circular economy. Good examples of functional currencies driving circularity agendas include the United Economy, a mutual-credit initiative by Triodos Bank, where members buy into certain ‘rules’ that promote the circulation of money in socially and environmentally sustainable initiatives; Wasted Plastic, where local inhabitants in Amsterdam Noord can exchange their plastic waste for tokens which they can exchange for discounts and offers at local entrepreneurs; and Jouliette, set up by one of Metabolic’s spin-offs, Spectral, a blockchain-based energy sharing token at De Ceuvel in Amsterdam.

Towards a more sustainable economy

Money has been around for centuries, and for good reason: it’s an essential ingredient for facilitating trade of different types of products between a large number of people, going right back to the days when Romans used gold and silver. Because of this, our money represents an important incentive structure within our economy, making it one of the most effective levels at which to intervene in a system. Small tweaks in the way we use it can have huge effects on the way we do business.

The rules of an economy, including the way money is created and used, define the behaviour of its actors. If local and functional currencies are adopted at a larger scale, they can be an important force in the transition to a circular economy. Currencies can be designed in such a way that they create direct feedback loops between financial gains and the sustainable use of scarce resources. The Jouliette and Wasted do this by rewarding the production of resources like renewable energy and plastic recycling, thus creating incentive structures for sustainable behavior and a positive feedback loop that results in an increasingly sustainable economy.

It is important to note that alternative currencies are not necessarily intended to replace traditional (fiat) currencies entirely, but instead act in conjunction with fiat currencies, facilitating local trade that fiat currencies are less suitable for. Thus, in the future there may be dozens of complementary currencies circulating in the economy at the same time, each serving a different purpose. Most existing alternative currency initiatives are still relatively grass-roots, but their initial success has already shown how they could one day contribute to a fairer and more sustainable world.

In working towards circularity within the realm of alternative currencies we recommend the following considerations:

Metabolic will continue to work with partners and clients to accelerate progress towards a circular economy. Contact us to learn more!